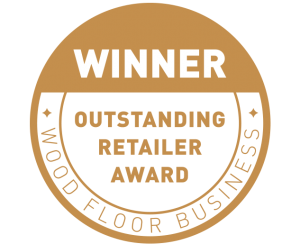 “Sometimes it seems like all the glory in the wood flooring industry goes to the stunning projects of the installers. But at WFB we thought we should also recognize some of  the retailers in the industry who do a stellar job.”

We are excited to share that Woodchuck won this year’s award. Want to know why?

Running a family business can be a unique challenge, says Tim Nassis of Woodchuck Flooring, which was founded by his father, George, in 1970. “Did me and my dad fight? Absolutely,” says Nassis, who took over the business with
his brother, Mark, 12 years ago. “Was his retirement more like a military coup than it was a retirement? Absolutely,” he laughs.
But while there may have been a few typical family-business disagreements over the years, there’s no arguing the legacy of customer service and integrity Woodchuck has developed throughout its nearly half a century serving the Toronto market. It’s a legacy the store continues to strengthen by always looking to improve, Nassis says.
“One thing about starting in a business really young is you’re always surrounded by experienced people who know more than you,” says Nassis, who began working there at the age of 14. “You try and absorb as much as you can.” It would be easy to sit
back and rest on their local name recognition and revered customer service, but Woodchuck is instead pushing to be at the forefront of e-commerce, developing Woodchuck Direct for contractors to purchase tools and supplies online for installation and refinishing projects.

“The potential there is massive,” Nassis says of the site. “I also wanted to make sure it was the proper online purchasing experience that shoppers have come to expect.”
Woodchuck, which has a knack for attracting overwhelmingly positive online reviews, has also been revamping its marketing strategy, signing on with a marketing firm last year and developing campaigns such as its 2018 “Win a Floor Makeover” contest. The contest, promoted through a local radio station, garnered 60,000 online impressions for the company. Nassis also thinks outside the box to create effective incentives programs for his sales team. Hit a certain sales goal, and employees receive gift cards or the chance to cruise in a $60,000 GT convertible Mustang for a weekend. “People like to feel appreciated,” Nassis says. While Woodchuck continues to bolster itself for the future, Nassis says the key to its longevity and success has been a classic one: the people. “Hire people for who they are, not just for what they can do,” Nassis says. “We can always teach you what to do.”
And as for the family business element, Nassis says his family has stuck together through the thick and thin, which has resulted in the best education he could have asked for: “I went to the university of life and graduated with a Ph.D. in common sense.”